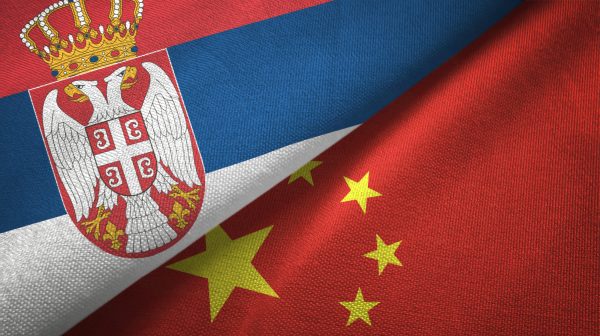 
The announcement of the signing of a free trade agreement between Serbia and China, the arrival of a Hainan Airlines flight from Belgrade to Beijing, and an increased level of interaction between Serbian and Chinese diplomats on a bilateral level are the most recent developments contributing to Serbia and China’s so-called “steel friendship.” Increased diplomatic activities and new aspects of economic cooperation could mark the start of a new phase in Belgrade-Beijing relations.

The Hainan Airlines airplane that landed at Belgrade’s Nikola Tesla airport on July 16 was greeted by Chinese flags and Serbian President Aleksandar Vucic, holding bouquet of flowers in his hands. This was the first direct flight from Beijing to Belgrade since the beginning of the COVID-19 pandemic. It is also the renewal of a direct flight operated by the same airline that was canceled in 2018, sitting a lack of passengers at the time.

Chen Bo, the Chinese ambassador to Serbia, was among those on board the Hainan Airlines Airbus 330-300, which landed in Belgrade for the first time in several years. It was her first public appearance in Serbia since December 2021, following a seven-month diplomatic retreat in China. In her first statement at the Belgrade airport, Chinese ambassador noted“The opening of the direct line is the result of the rapid realization of a significant consensus between President Xi Jinping and President Vucic for a continuous improving the cooperation between our two countries.”

Chen took the opportunity to highlight the two countries’ “steel friendship,” stating that relations between Serbia and China should maintain a vital trend of development that is in both countries’ interests during a time of global crisis.

It is yet to be seen what the real benefit the re-established flight will bring, and whether it will manage to survive, unlike the previous attempt to connect two countries. The hope expressed by the Serbian president is that the flight will attract more tourists from China as well as business representatives. That possibility looks more likely when taking into account that Serbia and China are on the verge of signing a free trade agreement. During the opening ceremony of the Beijing Winter Olympic Games on February 5, Vucic and Xi met and announced that the two countries are aiming to sign a free trade agreement before the end of 2022. That would make Serbia the third European country secure an FTA with China, after Iceland and Switzerland.

In the beginning of July, Sinisa Mali, Serbian minister of finance and national coordinator for cooperation with China within the China-CEEC mechanism (formerly known as the “17+1 mechanism”) said that the working group for the preparation of the draft of the free trade agreement met for the first time. Mali “emphasized the importance of signing said agreement and further strengthening the trade connections with China, especially for Serbian agricultural and food producers and winemakers and viticulturists, who would be able to sell their products under more favorable conditions in the huge Chinese market.”

While the agreement is yet to be defined and signed, it has already been criticized by representatives of the Serbian opposition parties. The vice president of the opposition Freedom and Justice Party, Dusan Nikezic, expressed concern that the free trade agreement with China would only make Serbia’s status as a “colony” official. Nikezic expressed his concern because Serbia’s most important export goods are raw materials such as copper and lumber, which is especially concerning in the case of copper because the largest copper extractor in Serbia is Chinese-owned Zijin Mining. Nikezic and other critics of the announced agreement are concerned that China will benefit the most from it because it will allow for even more free trade of Chinese goods and will make it easier for China to extract goods produced by Chinese factories in Serbia.

While even the harshest skeptics acknowledge that the Chinese market represents an opportunity and that the free trade agreement may even attract to Serbia other investors interested in easier access to the Chinese market, they question the Serbian economy’s ability to break into the market and meet requirements that may be set by the Chinese side. So far, Serbia has not been particularly successful in these efforts, despite the good political relations between the two governments. Trade relations have resulted in a significant foreign trade deficit for Serbia, which could grow even larger with fewer barriers between the two countries.

One of the measures taken by the Serbian side to try to provide opportunities for Serbian businesses was the establishment of the Serbian Chamber of Commerce and Industry in Shanghai. While the office was established in 2017, it finally began to function properly in 2019, only to have its operations disrupted by the COVID-19 pandemic. The Chamber of Commerce office should collaborate and communicate with the Serbian Embassy in Beijing. Despite the fact that Serbia’s foreign policy has prioritized cooperation with China, however, Belgrade did not have an ambassador in Beijing from the end of December 2020 until the beginning of December 2021, when Maja Stefanovic was appointed.

Following her official appointment, the newly appointed Serbian ambassador to China became a quite active member of the diplomatic core. She most recently escorted Chen Bo to the airport in Beijing for the first Beijing-Belgrade flight in five years. Only day before that, Stefanovic and Chen visited the headquarters of Sinopharm in China to discuss the ongoing project Sinopharm factory construction in Serbia.

Finally, Stefanovic took part at a meeting with Wang Lutong, the director-general of the Department of European Affairs of the Chinese Foreign Ministry and the executive secretary-general of the Secretariat for Cooperation between China and Central and Eastern European Countries. Special Representative of the Ministry of Foreign Affairs for China-CEEC Cooperation Affairs Ambassador Huo Yuzhen also attended the meeting. The meeting’s purpose was to discuss the framework of cooperation between China and Central and Eastern European countries, which has recently been challenged by Lithuania’s exit from the China-CEEC platform as well as decreased interest from several other European countries. As a sign of the latter point, only 11 ambassadors attended the meeting. Serbia has demonstrated commitment to the platform and has been viewed as a secure partner for China, whose participation in the cooperation mechanism in beyond question.

These developments can be seen as a continuation of the development of the comprehensive strategic partnership between the two countries. But the cooperation is not unchallenged. Serbia has often been criticized by the representatives of Western countries for its high level of cooperation with China. Most recently, Manuel Sarrazin, German special envoy for the Western Balkans, stated that China invests and cooperates with Serbia with the end goal to establish its own hegemony and not for Serbia’s benefit. Chinese companies in Serbia have frequently received criticism for their environmental impact in the regions where they conduct business in Serbia, and have been under spotlight for the treatment of workers employed in the construction of Chinese factories in Serbia. However, these concerns did not deter Serbian leaders and the government from maintaining close relations with Chinese partners.

As a result, recent developments could be interpreted as both a continuation of the existing partnership and the start of a new phase of relations. The new phase would include increased promotion and diplomatic activities in both countries, as well as easier movement of Serbian and Chinese people, businesses, and services. But what should not be forgotten are the challenges and concerns for environmental protection, warning that Serbia could find itself in a vassal position toward China, and the issue of workers’ treatment in Serbia. All of those challenges and concerns are caused by the existing level of cooperation, and could potentially become even more serious with the increased level of cooperation between the two countries.