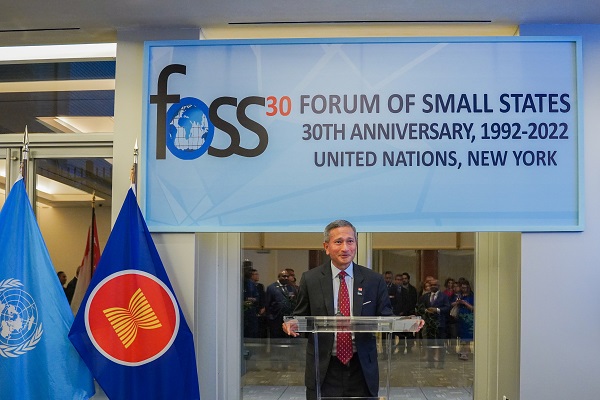 
Ladies and gentlemen, it is a pleasure to see you and of course, to see many familiar faces as well. Friends, thank you for joining us for the 30th anniversary of the Forum of Small States (FOSS). I suppose it is an understatement to say we live in a volatile, somewhat dangerous world. Apart from war, the digital divide, the pandemic, cybersecurity, all these are threats affecting the global commons, but (are) actually even more dangerous for small states.

We formed the Forum of Small States back in 1992. It started as a small informal cross-regional group – I think we just started with 16 countries – and because we were small, we had to support multilateralism because that is the only game in town for us. The alternative is “might is right”. We actually had no choice. Over the three decades, we have now grown to a 108. I think that means we now constitute a majority in the (United Nations) General Assembly. It shows that even small states – we can make common cause, can have agency. Abdulla Shahid who used to be the President of the (United Nations) General Assembly, will testify to the fact that we are champions and advocates for the UN, for multilateralism, and for international law.

No country can tackle the problems that we are facing today alone. We can do so much more together, make common cause, and especially now to protect the global commons. In the last two years, we have seen the pandemic and now as we see war in Europe, as anxieties rise in Asia, as we watch floods and droughts, and energy and food insecurity, I do not need to convince you that the global commons means a lot – critically – for all of us. The UN Secretary-General’s “Our Common Agenda” that Antonio Guterres launched is what we believe (to be) a very good initiative and is a good basis for cooperation amongst all of us. We see it as a vehicle to accelerate the implementation of the SDGs (Sustainable Development Goals) and to revitalise and re-energise the UN. I hope we can all work together to support this agenda, to support the UN and get back on track for the Agenda 2030 and the SDGs.

Singapore will continue to do our part and the Singapore Cooperation Programme has provided capacity building programmes to more than a 100,000 officials from around the world. If you realise how small Singapore is, to us this is a big deal. I just wanted to reiterate that we continue to welcome all of you to spend time with us, get to know us, the peculiarities and uniqueness of Singapore, (and) give us a chance to learn from you. Hopefully we can all use these lessons to make the world a better place, starting from our little corner of the world.

Let me again thank you all for being here, for commemorating the 30th Anniversary of FOSS. Our usual motto: May the FOSS be with you. Thank you all very much. Minister for Foreign Affairs Dr Vivian Balakrishnan delivering opening remarks at a reception to commemorate the 30th anniversary of the Forum of Small States in New York, 22 September 2022